How to be a Trustee for a New Zealand Trust

The position of trustee is an extremely important one, as trustees are in a "fiduciary" relationship with the trust's beneficiaries. This means that they are in a special position of trust and accordingly have a number of significant duties. If you are a trustee, it is vital that you familiarise yourself with those duties, as you can be liable for "breach of trust" if you do not fulfil them.

This article gives information about the duties of trustees, and also gives practical advice about how to ensure that those duties are complied with.

Once you have understood the subtitles of a Trust formation though reading this and the related articles, you may wish to prepare some of the required documentation yourself.  A number of cost effective Trust Documents are supplied by New Zealand LegalDocuments. 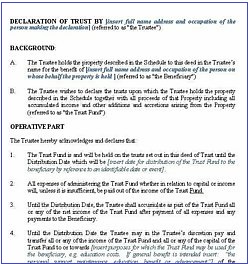 Who can be a trustee?

Any person who can own property may be a trustee. A minor (someone under 20) can be a trustee, but a court would have to appoint someone to act as trustee until the minor turns 20.

The main duties of trustees

In general, the main duties of trustees are:

Specific duties when the trust is set up

Trustees should be aware of the following issues when a trust is first created:

Before making decisions the trustees should acquaint themselves fully with all the relevant facts, and consider whether they need expert advice from lawyers, accountants, investment advisers or other specialists

After considering any expert advice that they think is necessary, the trustees must ensure that they turn their own minds to the question in hand, acting honestly and in good faith. The decision must be theirs, and not that of their expert advisers, as trustees are not permitted to delegate their decision-making power, except when this is authorised by the trust deed.

In general, trustees should not commit themselves in advance as to how they will exercise a discretion in the future.

Trustees can apply to the courts for directions concerning any of the trust property, or the management or administration of the trust property, or the exercise of any power or discretion vested in them. In this way trustees who are in doubt about the legality of an intended course of action can get the court's approval and be protected from any liability for the action.

Trustee decisions must be unanimous, unless the trust deed allows for majority decisions.

The trustees should record all their decisions. They should also record the reasons for their decisions, and attach all the relevant documents including any expert advice given.

Can the beneficiaries challenge decisions of the trustees?

However, the TRUSTEE ACT 1956 gives beneficiaries a limited right to apply to the court for it to review a decision of the trustees; this applies only when the trustees have exercised a power under the Act, not a power given by the trust deed.

The courts may also interfere in some cases when the trustees have acted outside their powers or have acted capriciously, or have taken into account irrelevant or improper factors, or have made a decision that no reasonable trustee could make.

Trustees are liable for any transactions they enter into that they are not authorised by the trust deed or by statute.

Are trustees paid for their services?

If the trust deed doesn't provide for payment, then the trustees would need the consent of the beneficiaries or of the court to receive payment.

How are new trustees appointed? How are trustees removed?

The Act says that the new trustee is appointed by the person whom the trust deed nominates to make new appointments, or, if the trust deed doesn't nominate anyone, by the other trustees.

The beneficiaries cannot control the exercise of the power of appointing new trustees conferred on a continuing trustee by the Act.

Trustees can also be removed under any express power contained in the trust deed.

Not Legal Advice Disclaimer: Nothing on this website constitutes legal advice. HowToLaw is not a law firm and provides legal information for educational purposes only. For legal advice, you should consult a lawyer.
© 2023 How To Law | Website by eDIY

Thank you, your message has been sent successfully.