recover debt from a company

the duties of company directors

the rights, powers and liabilities of shareholders

How to liquidate (wind up) a company

Liquidation (or "winding up") is a process by which a company's existence is brought to an end.

What are the different types of liquidation?

The law classifies liquidations into two types: Voluntary Liquidation (which is by a shareholders' resolution) or compulsory (by a court order).

You may use this short form liquidation document ONLY if your company has ceased trading and has no liabilities and any assets have been distributed in accordance with your company’s constitution. 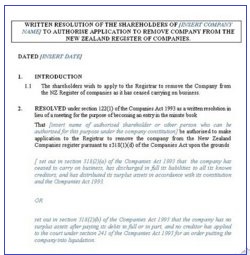 Liquidations are also classified according to whether the company is solvent or insolvent.

If the company is insolvent, this means it is unable to pay its debts as they fall due. In this situation there is potential conflict between creditors (those to whom money is owed), as there will be insufficient assets for all creditors to be paid in full.

The law attempts to maintain an equality between creditors, so the assets are distributed proportionately according to the size of each creditor's claim. However, the law gives priority to secured creditors (those with a charge over some of the company's property as security for the debt). In addition, a number of rules exist to prevent one or more creditors from gaining an unfair advantage.

A voluntary liquidation may also by commenced by the board of directors if an event specified in the company's constitution has occurred.

Compulsory liquidation of a company requires obtaining a court order. This process starts with an application to the court alleging that one or more of the required grounds exist. The application may be brought by the company or a majority of its directors, or by the Registrar of Companies, or by a creditor. Applications by creditors are by far the most important and common.

The procedure for liquidation

Broadly speaking, the liquidation process is as follows:

What are the consequences of liquidating a company?

The main consequences of the company being liquidated are as follows:

Order of distributing the company's assets

There is a hierarchy that determines the order in which a company's assets must be distributed in a liquidation. This is strictly enforced by the Courts. Any secured creditors have the first right to the assets and are usually paid out before there is a distribution. After this is paid out, any remaining debts are paid in the following order of priority:

Further information is available at the NZ Companies Office.

recover debt from a company

the duties of company directors

the rights, powers and liabilities of shareholders

Not Legal Advice Disclaimer: Nothing on this website constitutes legal advice. HowToLaw is not a law firm and provides legal information for educational purposes only. For legal advice, you should consult a lawyer.
© 2023 How To Law | Website by eDIY

Thank you, your message has been sent successfully.